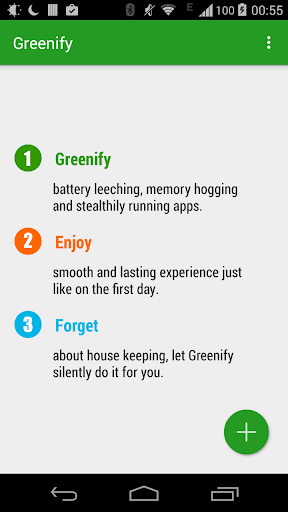 This is just a donation package which activates some experimental features in the Greenify app. These features can be enabled in settings of Greenify.

Some of these experimental features are still in early stage. They may not work on all devices & ROMs. They are included only for advanced users with sufficient knowledge about what they really mean and how to correctly use them. These features may cause malfunction or crash in apps. In rarely extreme case, you might need to factory reset your device to recover. I will try my best to avoid those situations, but take no responsibility for the possible consequences.

It is safe to purchase and install, since nothing is affected until any of the experimental features is enabled explicitly.

◆ Allow (most) system apps to be greenified in Greenify

Beware, most system apps are critical to the basic functionality of your device, once greenified, you may lose some part of usability. If something bad happens, degreenify the system apps you recently greenified and reboot, or deactivate this experimental features of Greenify and reboot.

Android framework is patched to allow Greenify to perform hibernation and other operations without the slow root routine. Besides, Boost mode also improves compatibility of many features in Greenify.

Google service framework is patched to allow the GCM (Google Cloud Message, a.k.a. C2DM) broadcast to wake the hibernated apps, thus you can greenify some apps without losing the ability to receive push message.

Attention: Not all apps use GCM as push mechanism, some apps create their own connection for push in background service, thus can’t benefit from this patch and their push messages can never survive hibernation. Please DO NOT ask for that, it’s just a “mission impossible” in practice. Instead, ask their developer to adopt the more RAM-and-battery-friendly GCM push.

1. Download and install Xposed installer: http://goo.gl/CKTWXZ
2. Install the “Framework” in the “Xposed Installer” and activate “Greenify” in “Modules”.
3. Reboot

=== Why do I need to install another framework for some features to work? ===

Added a launcher icon to guide user about correct installation. It will be removed automatically once its mission is accomplished.