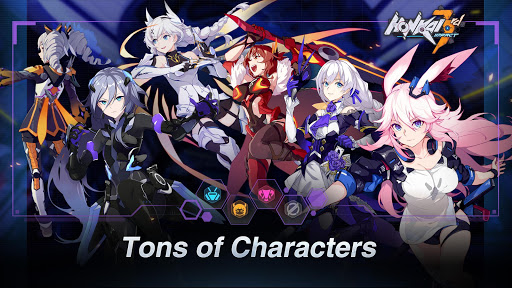 Super intense battles in a fast-paced 3D anime-style hack and slash!
The great enemy has returned to destroy humanity! Embark on an epic campaign to defeat this relentless foe! Join the world of Honkai Impact, fast-paced Action-RPG with vibrant Anime style graphics, smooth control and gameplay.

Dr. Einstein went missing after being attacked by a mysterious assailant. A sudden Honkai invasion transformed The Deep into a chaotic battleground…
Bronya dove into the Sea of Quanta on her own to retrieve the Gem of Desire.
Unexpected encounters await in this strange dimension…

【Swallowtail Phantasm】
Past memories coalesced in the yawning darkness to wake the sleeper.
The dimension-warping Swallowtail Phantasm battlesuit for Seele Vollerei is now ready for battle.
I’m ready, she murmured as she gripped the Shear of Phantasos. “We shall fight them together!”

【Selune’s Elegy】
Lament, for the storm of a thousand raven feathers is here. Unleash immobilizing fields to ensnare the dark beings of the night.
A new ELF, Selune’s Elegy, has joined the battle!
She is the Fairy of Death whose scythe is honed by moonlight. She is the herald of deadly silence to her foes…

【Q-Singularis】
Dangers and riches await those who dare explore the mysterious Quantum Void.
Dive into the gaping abyss and endure spatial collapses and tremors. Only the bravest can survive the Void.
Time your attacks, acquire Evadion, and strike for the deepest heart of the Singularis!

【Equipment Updates】
Unleash the Dark Flood with a swing of this scythe. Let the razor edge of Undine’s Tale sing the deadly melodies of Seele’s darkest desires.
Dance the Quantum Waltz with the [Dirac] stigmata set. Master the Particle Vibrations in the war against the Honkai.