App Information of Paradise of the Desert Fathers (Wallis Budge) 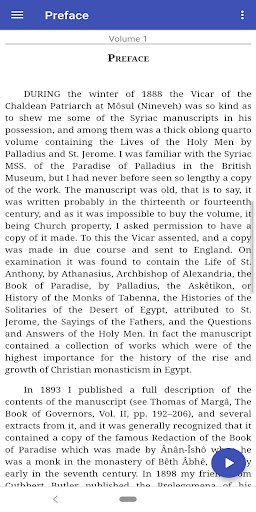 Description of Paradise of the Desert Fathers (Wallis Budge)

The Paradise of the Desert Fathers is a collection of sayings and narratives written about the Desert Fathers of the Egyptian desert. The collection is widely known in the Coptic Church as Bustan Al-Rohbaan (The Monks’ Garden). The “desert fathers” encompasses an influential fourth century group of hermits and cenobites who settled in the Egyptian desert. The origins of Western monasticism lie in these primitive hermitages and religious communities. Paul of Thebes is the first hermit to set the tradition of monastic asceticism and contemplation, and Pachomius of Thebaid is thought to be the founder of cenobitism, or early monasticism. However at the end of the third century the famous St. Anthony of Egypt oversaw colonies of hermits in the middle region. He soon became the archetypal recluse and religious hero. His fame was due in no small part to St. Athanasius’ biography of him. These early monastics drew a sizable following to their austere retreats through the influence of their simple, individualistic and rugged search for salvation and unity with God. People would often appeal to these desert fathers for spiritual guidance. Their responses were recorded in this collected work called Paradise or Apophthegms of the Fathers.

Related Posts of Paradise of the Desert Fathers (Wallis Budge)