App Information of The Trumpets 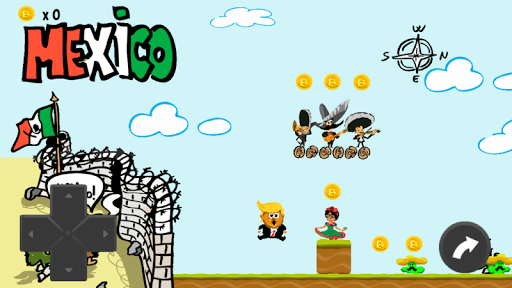 Description of The Trumpets

A SIMPLE and FUN one player game, introducing “The PLAYER” (a fictional presidential character) on his road trip from the Mexican Wall to Canadian Trade Wall.

The PLAYER is traveling through one page game scenery, crushing the fictional characters known as “The ENEMIES” and collecting the cryptocoins a.k.a. “The BUTTCOINS”. The PLAYER can move left/right or jump over obstacles via virtual touchscreen controller.

The game works best on a touchscreen display with a resolution of 720×1280 pixels (i.e. Samsung Galaxy A3 or similar device). The game width is changed to fit any screen (landscape device orientation), however main page may be cropped to size (i.e. tablets and similar devices). After the final score page is reached, the game closes itself within a few seconds in order to save battery.

ALL CHARACTERS APPEARING IN THIS GAME ARE FICTIOUS. ANY RESEMBLANCE TO REAL PERSONS, LIVING OR DEAD, IS PURELY COINCIDENTIAL.
The First Tested release, ready for review and GO-Live.

Related Posts of The Trumpets

The Battle of Polytopia - An Epic Civilization War Freeze A